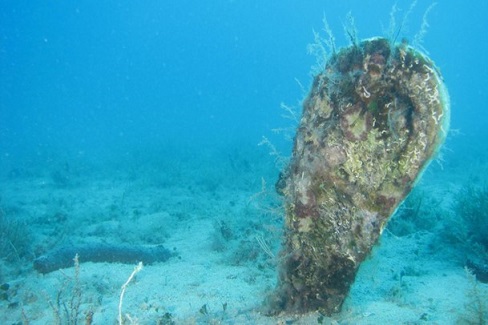 One of the last Pinna nobilis shelters, in the Adriatic Sea, is affected by a mass mortality event. The noble pen shell, an endemic and the largest shellfish of the Mediterranean, can grow to 120 cm of height and can be found on sediment bottoms of shallow coastal areas in the Adriatic Sea.

The noble pen shell has an important ecological role because it filters and retains large amounts of organic matter from suspended detritus, which contributes to increasing the seawater transparency. The large biodiversity of organisms can be seen on the surface of pen shell. It is sensitive to extreme pollution and many pen shells are injured due to anchoring and the illegal removal.

This shellfish is protected by the Croatian Nature Protection Act and is listed in Annex 1 of the Ordinance on Strictly Protected Species. It is also subject to strict protection under the EU Habitats Directive and is considered to be endangered under the Barcelona Convention Protocols. The first mass mortality event (MME) of noble pen shell in the Mediterranean on the eastern coast of Spain was recorded in 2016. The parasite that is responsible for this event is a newly-discovered species of Haplosporidium pinnae.

According to the International Union for Conservation of Nature and Natural Resources (IUCN) report of March 2019, MME have been recorded and confirmed in France, Italy, Turkey, Greece and Albania. The mortality rate in most locations exceeds 99%, and the cause and volume of MMEs in the Mediterranean is still unknown.

The Croatian Ministry of Environment and Energy and the Ministry of Agriculture have been informed about the MME, and they will take further measures with regard to the prescribed steps. If you notice locations where individual pen shells can be found in the Adriatic Sea, please send an e-mail to info@remove-this.drustvo20000milja.hr

“Marine Explorers Society 20.000” recorded the first death of noble pen shell in the Adriatic Sea, on the Elaphites. The publication of the first scientific work of the Society 20000 Miles regarding this topic is an exceptional success that this society has achieved with their Croatian and Spanish colleagues. They also had a strong cooperation with IUCN-Med, which coordinates a network of scientists monitoring the state of the pen shell in the Mediterranean. Thus, the scientists had the opportunity to participate in the endangered status assessment of the noble pen shell at the Mediterranean level, where this species was declared critically endangered according to the IUCN Red List. The scientific paper, which summarizes information on monitoring the pen shell population, was published in April 2020 in the Journal of Invertebrate Pathology.