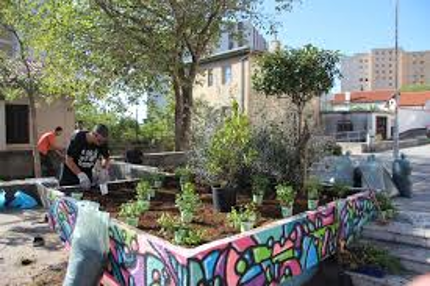 In 2020 Rijeka will be the European Capital of Culture (the official opening will be the 1st February 2020). Alongside cultural initiatives, Rijeka also launched the “Green Wave” project, to raise awareness of environmental protection.

One of the aims of Green Wave project is to fill the city’s areas, squares, streets, windows and balconies with remedial, fragrant, edible and indigenous herbs by 2020. In this way, Rijeka wants to contribute to the positive evolution of the cityscape, to improve the microclimate of city streets and to raise awareness on ecology. The initiators of Green Wave decided to be the leaders of initiatives to make Rijeka an healthier and more beautiful city and they invited the citizens to propose ideas. Numerous proposals of eco-awareness programs were received.

Among the proposals that have been carried out, one worth mentioning (“bottom-up” initiative) is that the citizens planted several varieties of Mediterranean fruit trees on the landscaped area, including carob trees, old pomegranate varieties, two types of fig trees and more.

The edible city movement has been expanding around the world, turning public, often neglected green spaces into gardens full of edible plants that are accessible to all. Edible cities are created by the residents and they are special in that they give residents a sense of food security, a connection with nature and further enhancement of the sense of community and cooperation among local people.