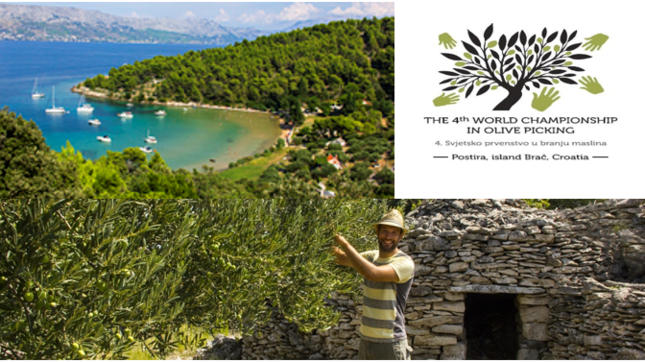 “Creative Tourism Awards”, an international network for the creative tourism promotion, is designed to award organisations, initiatives and destinations around the world which demonstrate a true commitment in creative tourism and invite the tourists to discover the local culture by participating in creative and artistic activities that are co-created with the local population.

The Olive Harvest World Championship in Postira, Croatia, was awarded with the Best Creative Experience Award in 2019. It is an unique activity in the whole world, and it also preserves a centuries-old tradition by sharing it with tourists and locals.

About The World Olive Picking Championship. The third edition of the World Olive Picking Championship was organised by Postira Tourist Board and the Postira Agricultural Cooperative. This event took place from 10th  to 13th of October 2019 in Postira, on the island of Brač. The  aim is to promote the olive growing and everything linked to it. Participants were Mediterranean countries with a tradition in olive oil production but also others which have no olive trees.

In 2018, Postira hosted teams from eleven countries: Slovenia, Hungary, Montenegro, Spain, the Netherlands, France, USA, Great Britain, Sweden, Bosnia and Herzegovina and Croatia (Postira and Dol inhabitants). The absolute winner of the 2nd World Olive Picking Championship was the Croatian National Team with 67 kg of olives picked. The second place was taken by the Montenegrin Team and the third place was the Slovenian Team. At the festive evening of proclamation of winners, the winners' stone medals were awarded by the Mayor of Postira, Mr Siniša Marović as the envoy of the Prime Minister of the Republic of Croatia, Mr Andrej Plenković. In 2019, the teams of participant countries counted four members:  two women and two men.  Besides the competition part, workshops are organised, as well as tastings, tours and entertaining evenings in order to experience Postira, the eco-ethno village Dol and the island of Brač itself.