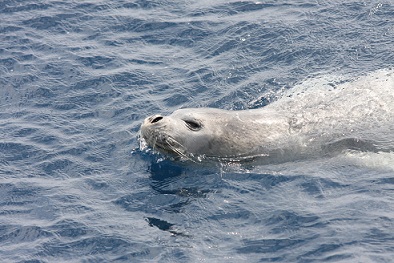 The Mediterranean monk seal (Monachus monachus) is one of the most endangered mammalian species in the world. It has a highly fragmented distribution including the temperate and subtropical waters of the Mediterranean Sea and the eastern Atlantic Ocean.

It is estimated that species is currently represented with around 600 individuals grouped into three geographically isolated subpopulations – Eastern Mediterranean (Greece, Cyprus, Turkey), Western coast of Africa, and Madeira archipelago.

Increasing human pressure and deterioration of their suitable habitats have led to a change in the social behavior of the species. Once a gregarious species forming colonies they are now more often found as solitary individuals or present in small groups.

The historic distribution of the Mediterranean monk seal used to include the Adriatic Sea.

Based on the IUCN Red Book of Mammals for Croatia this species is currently listed as regionally extinct in the Adriatic Sea. Similar occurrences of Mediterranean monk seals have also been described in other areas where this species is considered geographically extinct.

Four months ago, one individual was noticed in Croatia, more precisely in the Pag Gate at the junction of the Pag Bay and the Velebit Channel and in the area of Punta Sv. Nicholas. This species has been exterminated in the Adriatic mainly by fishermen and fishing tools, so it has not existed for decades. The Mediterranean seal is protected by the Nature Protection Act, and according to the Ordinance on the amount of compensation for damage caused by illegal actions on protected animal species, the fine for killing a Mediterranean seal is approx. €14,000.00.