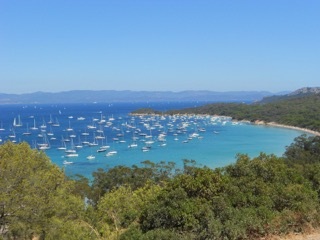 Located in department of Var (South of France), Porquerolles island has seen its average number of visitors rise from 8.500 to 12.000 per day during the summer of 2020. This increase is explained by French tourists staying in France due to the health situation.

Since the beginning of July, and by decision of local authorities, the number of visitors on Porquerolles island is limited to 6.000 per day. To enforce this measures, shipping companies connecting island have signed a charter, forcing tourists wishing to visit the island, to book their ticket online or on site.

This 6.000 tourists per day rule was taken following a survey, showing that above this number 1 tourist out of 2 questionned said they were dissatisfied with their visits, due to crowded beaches, endless queues on the dock to take boats and decrease in the quality of service on site.

In addition to having an impact on tourist's satisfaction, this measure is intended to reduce the impact of overcrowding on island's ecosystems.These impacts on local’s ecosystems are mostly caused by illegal barbecues and increase of litter. These two phenomena have an impact on local wildlife, and mainly on the nesting birds present in Porquerolles such as the Cory's Shearwater and the Mediterranean Shag.

Following this experiment with gauge of 6.000 daily visitors, a feedback meeting is planned in October with locals stakeholders in order to prepare summer 2022. In addition, in the coming months, a project to set up a mooring zone for pleasure craft will be put into practice with the aim to protecting posidonia meadow. These meadow, which act as a habitat for marine species, are also great carbon sinks. For example, in Corsica, posidonia meadow retain 10 to 15% of carbon emitted by the island.