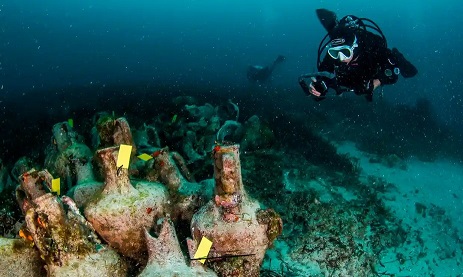 The first underwater Museum of Greece opened at June 1 in Alonissos, honorin the contract signed between the Ministry of Culture and Sports, the Region of Thessaly and the Municipality of Alonissos, marking the opening of the first full tourist season after its last year's inauguration.

The pilot opening of the underwater Museum made a difference last season as many divers all around the country rushed to visit Alonissos, despite the difficult international times, as emphasized in the announcement.

The shipwreck is at a depth of 22 to 33 meters and has been considered, so far, the largest shipwreck of the Classical Period and the most important ancient shipwreck to visit in the world. In all probability, the ship was an Athenian merchant, loaded with 4,000 amphorae and other vessels and had dimensions of approximately 25 meters long and 10 meters wide, while it sank in the period 425-400 BC.

At the same time, a state-of-the-art information and awareness center has already been created and is operating in the town of Alonissos, the first in Greece, which transports the visitor to the magical world of the seabed and the ancient shipwreck with the help of virtual reality. Special cameras broadcast live from the bottom in real time the history of tens of centuries, stunning images take your breath away and ancient stories transport tourists to another dimension, without having to dive.